"Postumus Friesianorum" can translate as "the Last of the Friesians," which I hope is not true, but bids fair to be so, at least in the United States. As a fan of James Fenimore Cooper's great, immortal novel, The Last of the Mohicans -- and its recent 1992 movie version (part of the Main Title theme from the soundtrack, performed by Clannad, Morgan Creek Music Company, 1992), costarring one-time Libertarian Party Vice-Presidential candidate and American Indian Movement activist Russell Means (1939-2012) 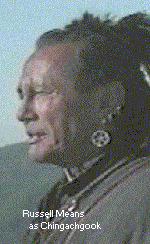 -- I like the ring of the phrase and its associations:  The movie's reinterpretation of the seige of Fort William Henry as a foreshadowing of the American Revolution has nothing to do with the book (where the British are unproblematic allies), but it is appealing in its own right.

Unfortunately, the movie does leave out what I recalled from childhood as the most dramatic and memorable moment in the book:  When the lineage of Uncas as a Mohican is revealed to a Delaware warrior stripping off his shirt.

The Delaware is suddenly "frozen in an attitude of amazement," and, "every eye was, like his own, fastened intently on the figure of a small tortoise, beautifully tattooed on the breast of the prisoner, in a bright blue tint." This turns Uncas from a prisoner, about to be tortured to death, into the respected member of an elder lineage to the Delawares and their venerable chief, Tamenund. On the other hand, the movie formulates a much more dramatic denouement, where the villain Magua, who has just killed Uncas, is dispatched in fierce hand to hand combat by Chingachgook, rather than merely shot from a distance by Hawk-Eye.

Be warned that television versions of the movie may cut parts of scenes for being too violent, even though this is pretty tame stuff by "action" and "horror" movie standards.

"Postumus" can also mean, as it does in English (as "posthumous"), a child born after the death of its father. Since Leonard Nelson and Julius Kraft died well before I knew anything about the Friesian School, or, in Nelson's case, before I was even born, and they seem to me to be the last people willing to defend Kant-Friesian epistemological and metaphysical principles, I could well regard myself as their "posthumous" progeny.