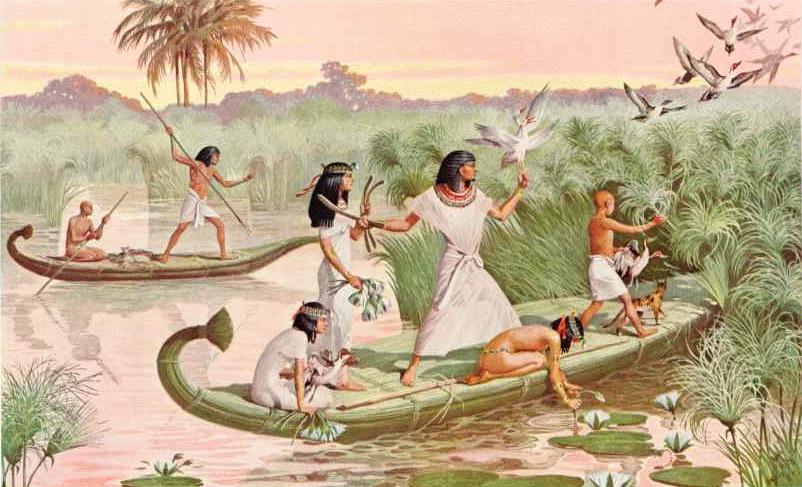 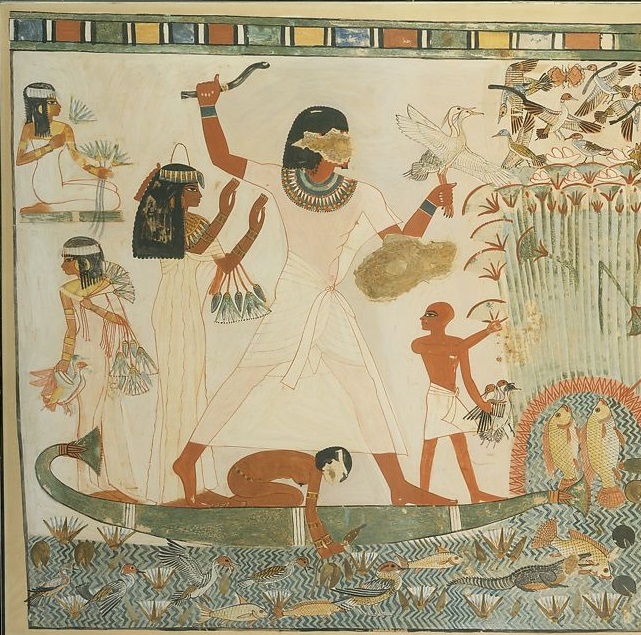 Sadly, in this image from the Metropolitan Museum of Art, the faces have been vandalized on Menna and his youngest daughter. Why only those two were so treated is unknown. If it were religious objections on the part of Muslims to any human representation, then all the figures should have been attacked.

If it was Menna'a personal enemies, then for some reason only one of his daughters is included in the antipathy. Another posibility is that maybe the future husband of the younger daughter ended up not liking both her and her father. This has been known to happen, although to effect this revenge the husband would have needed to outlive all of them, and then have the courage to vandalize a tomb. This seems unlikely.

Note that the dress here (for those who are dressed) is far too formal for a real fowling trip. The religious purpose of this scene is furthermore indicated by Menna's wife raising her hands in worship. The national geographic artist, H.M. Herget, for the image above, must have at least thought this peculiar, since in that version of the scene Menna's wife is holding flowers, like the girls, and also extra hunting sticks for her husband. The gesture of worship is left out. Herget has also left out the cone of perfumed fat on the wife's head, which is something we find at parties and can hardly be practical on a hunting trip. It's going to fall off.

Click on the image for a pop-up of the larger painting, where Menna is spearing fish. Either he is fowling and fishing to provide food in the afterlife, or the birds and fish represent some kind of forces that he needs to subdue. I doubt that the forces are demonic, since none of the family seems alarmed at their presence. It may be nature itself, whether literally representing food or not, that must be tamed and used.