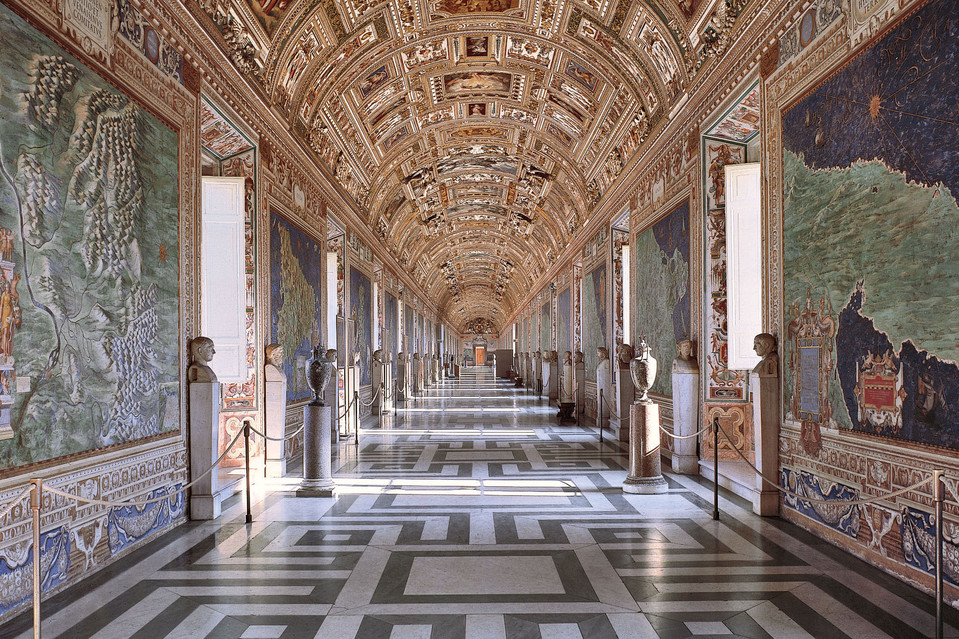 I wonder if a single thought that has helped forward the human spirit has ever been conceived or written down in an enormous room.

In July 1970 I was visiting Rome, the only time for many years that I'd been there. I went to the Vatican Museum, which at the time mainly meant for me seeing the Sistine Chapel. The entrance to the Museum, however, was not on St. Peter's Square or near the Chapel but around on the north side of the Vatican, where it still is. There was a very long gallery, with windows on both sides, that connected the entrance, across the Vatican grounds, to the area of the Chapel. I did not pay much attention to this feature, or about how I got to it; but I remembered it, in part because the day was very hot, none of the interiors were air conditioned, and someone was actually throwing up, probably from heat prostration, in what seemed to be a bird bath, or similar item, that was along the way in the gallery. I don't remember anything else about the Museum area except the gallery and the Chapel itself. No air conditioning there either, and packed with tourists. Between the heat and humanity, this cannot have been good for the art work. It was some years later that Michelangelo's frescos were cleaned and some attention was paid to the need for climate control. The crowds of tourists, however, may now even be worse than they were in 1970.

Some years later I was able to watch on DVD Kenneth Clark's epic treatment of Civilisation, which I had missed when it originally came out. At the end of Clark's episode on the Baroque (#7), he makes the statement in the epigraph above, after which the camera pulls back to reveal that he is at the end of a very long gallery, obviously to illustrate the sort of "enormous room" that he imagines. I thought at the time, "That place looks like the gallery I saw in the Vatican." However, where it was exactly was not identified in the credits or subtitles of Civilisation; I didn't remember the look of the gallery all that well; and I assumed that there were a lot of places like that in Rome for Clark to choose from. Watching the shows over again a few times, I always wondered where that "enormous room" was. In this day and age, I might have been able to identify it from information on the Web; but my interest apparently was too casual for that.

That is where things stood until the Wall Street Journal ran a review of the newly restored "Gallery of Maps" in the Vatican ["An Italy Alive Again in Maps," April 23-24, 2016, p.C14]. Casual or not, the information now came to me. And now this was obviously the place in Civilisation, and there could not be two such galleries, more than a football field long, even in the Vatican. So I had walked right down, right past the vomiting tourist, the length of Clark's "enormous room." From the photograph, there is no longer the clutter of extra objects, like bird baths, that were there previously.

Clark's comments, of course, were part of the "misgivings" he expresses in the end about Baroque art. It strikes him as a bit too much and, perhaps worse, was patronized by Roman families, "rapacious parvenues," whose motives were mainly "private greed and vanity." While the Popes had always been nepotistic, and the Papacy often a football for local nobility, the families of the time, like the Medici, Barberinis, Borgheses, etc., treated the Papacy as a kind of enrichment industry. The wealth and flamboyance of the era may have exceeded the corruption of the Renaissance Papacy that provoked the Reformation.

But the Church is on the triumphant crest of the successful Counter-Reformation. The Gallery of Maps itself was commissioned by Gregory XIII, and it was completed in the very year, 1582, when Gregory instituted the calendar reform that still bears his name. Protestant and even Orthodox Europe eventually adopted the Gregorian Calendar also (although not in time to prevent confusion about the Russian Revolution).

Now, there are some odd things about Clark's misgivings on the Baroque. Bernini's work, which all but dominates the episode and the age, is brilliant, stunning, and moving. Clark has nothing but praise for all his works, especially his "St. Teresa of Ávila," before expressing his reservation that the real St. Teresa didn't look like that.

However, I have already noted the artistic versimilitude of Bernini's sculpture because he transforms the undoubted charisma of St. Teresa, which is intangible, into the glamour that can be visually presented in tangible art (in the terms explored by Virginia Postrel). Also, by the external reality of the marble sculpture, Bernini manages to convey a sense of the internal, ecstatic experience of St. Teresa, in which much of the power of the piece lies. 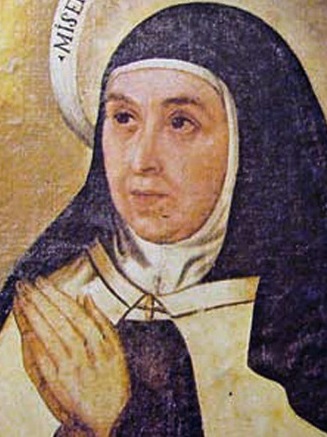 Indeed, Clark's critical characterization of the sculpture as "swooning" can be matched with one of St. Teresa's own terms, amortecimiento, just as the whole piece matches Teresa's own description of her experience.

But there are some larger ironies in Clark's treatment. As his commentary ends and the camera pulls away from him down the gallery, we hear music of Monteverdi. It is magnificent, and continues in similar form into the end credits. This undermines whatever Clark was trying to convey in his "misgivings." The effect is of majesty and grandeur, which has not been compromised by any recollection of the nepotism of the Borgheses or the Cornaro patrons of Bernini's statue -- and Gregory XIII was himself a Boncompagni, a name really not otherwise familiar.

And, of course, the purpose of the Gallery of Maps, which we might not even think of as a "room" at all, was not to conceive or write any "thought that has helped forward the human spirit," but to look at the maps of Italy, while one passes on elsewhere, perhaps to the Sistine Chapel. At the same time, Clark has spent much of his time in the course of Civilisation in churches, where "an enormous room" is exactly the effect that the cathedral builders wanted, precisely to contribute to reflections that would "forward the human spirit." Clark has not complained about the large interiors of those cathedrals, not even the interior of the Renaissance St. Peter's in Rome, which is a couple doors away from the Gallery of Maps and contains one of the largest rooms in history. And if nothing about those churches bothered him, why should the Gallery of Maps then be singled out for an inappropriate opprobrium? Baroque art may indeed be a little too flamboyant and exuberant, but these are mild vices indeed compared to the grim anaesthesia that is now all too familiar from political and religious moralism. The Catholic Church, for all its own moralism, has rarely suffered from the anaesthesia imposed by either Protestantism or the modern forms of political and religious totalitarianism. The whole Vatican Museum, indeed, the whole Vatican, testify against it.

But we know that Kenneth Clark had his quirks, including serial philandering that drove his wife to drink. One of the greatest failings of Civilisation is his obvious dislike for the Victorians and for the Industrial Revolution. Unlike Jacob Bronowski, whose The Ascent of Man (1973) continued the video philosophizing format begun by Clark, Clark misses the point that mass produced beds, sheets, and sanitary tableware dramatically improved the lives and health of common people in 19th century Britain, despite the pollution that attended the "dark Satanic mills" that produced these things. When we then reflect that exposure of the "evils of capitalism" led to the mass murder of millions of people in the 20th century, of which Clark can only have been aware, the confidence, optimism, and liberalism of the Victorians begins to look pretty good, even if they thought that labor unions were criminal conspiracies (which public employee unions now certainly are).

So, in the end, Kenneth Clark's big room is a paradox. There is something objectionable about the flamboyant art of the Baroque, but the spaces of the cathedrals are positive reflections of humanity, while an "enormous room" like Grand Central Station doesn't even merit a mention, with the brief and sour attention that Clark pays to New York City of a piece with what Clark dislikes about the Victorians (who created such train stations) and the rest of industrial modernity -- without which he would have been unable to do his shows. I hope to walk down the Gallery of Maps again some day, in air-conditioning, and I expect its story and appearance will occasion some reflections, whether or not they help to forward the human spirit.

Revisiting the Gallery of Maps in 2019, it is, unfortunately, still not air conditioned, although other rooms nearby now are. The September weather, however, was more moderate than July had been in 1970; and even jammed with tourists, the space was not uncomfortably warm.

But we can can see the density of the crowd, which itself seems more than I remember from before. There are indeed more visitors to the Vatican these days, and lesser known sites in Rome, like the Church of Santa Maria Maggiore, are more pleasant for the relative lack of attention -- not to mention the absence of lines, tickets, and waiting. But there is security screening, as everywhere.

The curious colors of this photograph here are the result the camera adjusting for the color balance of the illuminated ceiling (3000K). Thus, it is not adjusted for the blue tones of the sunlight coming through the windows (5000K). The eye, or perhaps the brain, compensates for these differences, which we rarely notice in ordinary experience; but cameras, even digital ones, after the age of photographic film (which used to be manufactured for specific kinds of light), will show the difference.

The reflections occasioned by the Gallery of Maps now are going to be for the maps, whose contribution to "the human spirit" embodies the interest of Pope Gregory's age in exploration and geography. This was a real thing, albeit perhaps not of quite the spiritual nature that might be occasioned by the vast nave of a cathedral. In St. Peter's itself, the space is so large, my feeling is that the distance defeats the power of my own eyes for stereoscopic vision, giving the scene an unreal, infinite flatness, like a painting. I don't know if this has "helped forward the human spirit" or not. In any case, I love Kenneth Clark's treatment of the Gallery of Maps for reasons totally at odds with his own commentary.