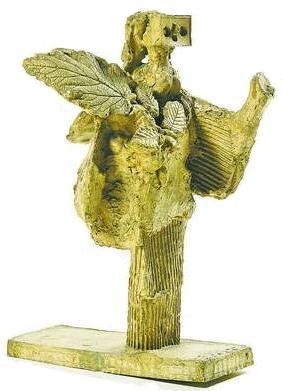 In the February 6-7, 2016, edition of The Wall Street Journal, sculptor Charles Ray discusses a piece by Pablo Picasso, the "Woman with Leaves," which had been appearing in an exhibit of Picasso sculpture at the Museum of Modern Art in New York [C12]. This was an example of the "Masterpiece" column that is featured every week in the "Review" section of the paper.

While Mr. Ray was quite taken with the sculpture, which is barely recognizable as a human form, what struck me was a similarity to the statue of the Babylonian demonic god Pazuzu, who was featured in the Exorcist stories. 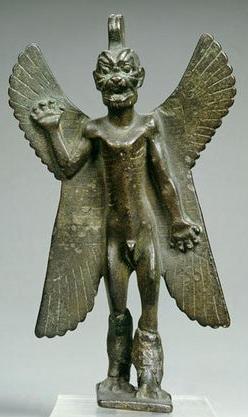 Thus, Pazuzu has wings, like the "leaves" in the Picasso, and his other features, although actually more human than the sculpture, are nevertheless of a horrific and frightful form (suitable for The Exorcist). Since Picasso was often inspired by non-European, especially African, art that distorted the human form, often to portray gods and spirits (δαίμονες), benevolent and malevolent, there is perhaps a connection, albeit indirect, between "Woman With Leaves" and a tradition that produced an image like that of Pazuzu. It is, as we sometimes gather from ancient religion, something nightmarish.

The question here more generally is the meaning of Modern Art. If "Woman With Leaves" is strange, frightening, and nightmarish enough to bear comparison to Pazuzu, what does this say about the meaning and effect that it should have for us? Although Oscar Wilde said that the purpose of art is beauty, no one with a passing acquaintance with Modern Art, or this particular product of it, could possibly still agree with him any longer. And although much recent art often celebrates its own, usually ridiculous, political messages, we cannot even say that about the Picasso sculpture. Indeed, Picasso's portrayal of women is often said to be misogynistic -- it certainly conveys some kind of fear and uneasiness, if not actual dislike -- and this is the opposite the political message expected (i.e. feminism) by the modern bien pensant. So Picasso was not sacrificing beauty in the cause of some kind of grim politics -- unless we want to interpret Picasso's misogyny as itself political, as feminists would. However we look at it, we might wonder whether Picasso turns Wilde's maxim on its head and that, rather than attributing ugly meanings to beautiful things, as if "Woman With Leaves" had some kind of politically incorrect erotic power, we are stuck contemplating little but ugly meanings for this ugly thing.

More than misogyny, however, a work of art like "Woman With Leaves" should be seen as bespeaking the general Nihilism of modern art. We have also seen this in music, where the atonality, dissonance, and cacophony of much of modern music -- but not popular or theatrical music -- would seem to go with a loss of sanity, a conceptual and even perceptual dissociation and incoherence.

Structure and form are shattered, and recognizable shapes dissolve into patterns that signify nothing beyond themselves. Pazuzu at least has a face, however altered in a demonic direction; but the Picasso turns the woman's head into some sort of block with holes in it. Out of context, this would never suggest a human face, and to the extent that we associate it with a face, because of the overall figure (and the title of the work), it evokes none of the emotions or associations that a real face would -- except for puzzlement, if not something more disturbing.

As modern art dissolves into abstraction and ceases to represent, it become self-referential and autistic. As Robert Hughes points out, a pile of bricks in the parking lot is just a pile of bricks, but piled in a museum it becomes "art" and the subject of learned discourse by people who think up ways that it means something rather than nothing. The piles of bricks can be a "statement," which the cynic might be excused for saying is about the folly and gullibility of the art world. "Woman With Leaves" is rather more than a pile of bricks, and Picasso has obviously taken some care to stick these forms together. The leaves actually do look like leaves, and the legs of the "woman" seem to be encased in something not unlike a pleated, almost Hellenic dress. So further abstraction is called for if we wish to dispense with the last pesky bit of irrelevant representation. Not to worry. The art world will soon fill with items about which museum goers will puzzle for decades. The revenge of the Philistines, of course, came when it was recognized that abstract patterns may be quite suitable for wallpaper. Something useful at last.

Indeed, "sculptures" as decorative tchotchkes for public spaces have the virtue that they occasion no political fights as there might be over representations of something more substantive, such as a statue of Robert E. Lee. The drawbacks are only that their ugliness or unintentional suggestiveness might occasion protests on those grounds. Thus, a sculpture in front of the 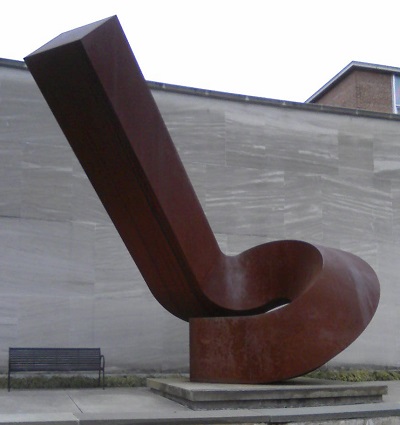 Engineering building at Princeton University (at left) really looks like a phallus, although I don't know if has been protested on those grounds. Some years ago, there was a sculpture in front of the classic Seagram Building in New York that looked like something removed during cancer surgery -- it has now been replaced by equivalently meaningless lumps. The merely meaningless may be unintentionally humorous. 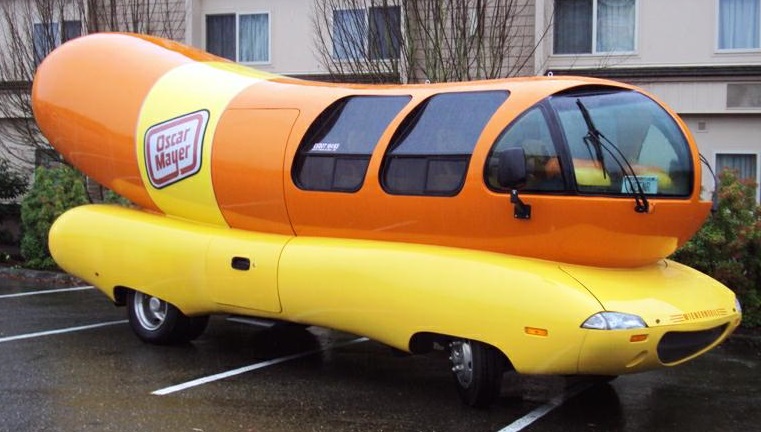 A pile of reddish-orange tubes (now faded to yellow) in front of the Engineering building at the University of Hawaii was said by a philosophy professor to look like "the wreckage of the Oscar Mayer Weiner Wagon." And it did.

Yet perhaps it is the very thing we should fear when a culture decides that the easiest thing is to resort to the meaningless or absurd when previously all civilizations would have used public spaces for gods, heroes, or, at least, kings. Even the Eiffel Tower, which became the tallest structure in history, embodies the heroic aspirations of 19th century technology. That is why, although intended to be temporary, it is still there. The Statue of Liberty does much the same thing and simultaneously expresses the heroic project and meaning of America and Liberty -- replacing the divine but fallen Colossus of Rhodes with the "Mother of Exiles." If we are now so cynical and disillusioned that nothing of the sort should any longer be honored, this has become the very essence of modern Nihilism.

Finally, something else is suggested by "Woman With Leaves." Perhaps its loss of human form is the result of decay.

Picasso is instantiating the disappearance of form and coherence that comes with natural decomposition. The end result, a putrifying mass, is indeed not unlike the end point towards which this kind of art is headed. The leaves are what has naturally fallen on a corpse lying in the forest, although in this case the figure is still standing, as though it were indeed an older sculpture from a civilization that believed in something more meaningful. Perhaps the pleated dress is a deliberate invocation of Greek sculpture like the figures in the Parthenon Frieze. It is unlikely that Picasso had such thoughts in mind while doing this, or other similar, works. He could still draw and sculpt representative figures when he wanted to. The disinterested observer might wonder if in this case he is no more than in the grip of a certain Zeitgeist, in a year (1934) when European civilization is manifestly falling apart, ground down between the Depression, the Nazis, and the Communists, all of which contributed their doses of misery and horror to the picture.

The continued popularity, at least among the elite, of this kind of art is as though the nightmares of the 20th Century are not quite over. Indeed, much of the rot of the old Hegelian ideologies still eats its way into the heart of Western Civilization, as the Welfare State and its advocates still have their sights firmly set on the prosperity and integrity even of the United States; and Lenin's "festival of the oppressed" at American schools revels in its own combination of lunacy and fascism. While the paradigms of European socialism (e.g. France) stagger towards their collapse, whose end game is manifest in the condition of Greece, and the previously hopeful new entries, like Venezuela, have rapidly descended into economic scarcity and chaos, this is ironically the moment that optimistic young Americans flock to the Bedlam of Bernie Sanders, an old fool ideologue who has learned nothing and forgotten nothing from his former days of admiring the Soviet Union and Castro's Cuba -- with an unreformed Cuba, still a totalitarian police state, suddenly the darling of tony society. The quite open insanity of this is of a piece with the fragmentaion and incoherence that we see here in "Woman With Leaves" and in modern music. Between the political idiocy of Western elites and the decapitating savagery of Radical Islam, anyone would be excused from thinking that the world, much like in Picasso's 1934, has lost its mind.