A few miles farther on, we came to a big, gravelly roadcut that looked like an ashfall,

a mudflow, glacial till, and fresh oatmeal, imperfectly blended. "I don't know what this glop is," [Kenneth Deffeyes] said, in final capitulation. "You need a new geologist. You need a Californian."

(1) And our view may be corroborated by actual observation more effectively than by any sort of verbal argument.

(2) And this is to be proven, better than any demonstration through words [λόγοι], from the observable [ἐνάργεια] itself.

Traditionally, these are questions for philosophy, but philosophy is dead. Philosophy has not kept up with modern developments in science, particularly physics.

I hold it do be true that pure thought can grasp reality, as the Ancients dreamed.

BILL MURRAY: "Ray, for a moment, pretend that I don't know anything about metallurgy, engineering, or physics, and just tell me what the hell is going on."

Xenophanes [of Colophon] thinks that a mixture of the earth with the sea is going on, and that in time the earth is dissolved by the moist. He says that he has demonstrations of the following kind:  shells are found inland, and in the mountains, and in the quarries in Syracuse he says that an impression of a fish and of seaweed has been found, while an impression of a bayleaf was found in Paros in the depth of the rock, and in Malta flat shapes of all marine objects. These, he says, were produced when everything was long ago covered with mud, and the impression was dried in the mud. All mankind is destroyed whenever the earth is carried down into the sea [θάλασσα, thalassa] and becomes mud; then there is another beginning of coming-to-be [γένεσις, genesis], and this foundation happens for all the worlds [κόσμοι, kósmoi; singular, κόσμος, kósmos].

Hippolytus, Refutation of all Heresies, G.S. Kirk & J.E. Raven, The Presocratic Philosophers [Cambridge, 1957, 1964, p.177]; until the 19th century it was argued that shells grew naturally in the rock; but this could not account for fossil fish, seaweed, and leaves. Xenophanes was the first to collect and record this evidence.

Proof really is everything
and nothing short of absolute rigour counts.

The Progress of Math Education

Teaching Math in 1955
A logger sells a truckload of lumber for $100. His cost of production is 4/5 of the price. What is his profit?

Teaching Math in 1975
A logger exchanges a set "L" of lumber for a set "M" of money. The cardinality of set "M" is 100. Each element is worth one dollar. Make 100 dots representing the elements of the set "M". The set "C", the cost of production contains 20 fewer points than set "M." Represent the set "C" as a subset of set "M" and answer the following question:  What is the cardinality of the set "P" for profits?

Teaching Math in 1995
By cutting down beautiful forest trees, the logger makes $20. How do you feel about this way of making a living by destroying nature? Topic for class participation after answering the question:  Everyone take on the roles of the forest birds, squirrels, and trees and express how they would feel as the logger cuts down the trees. There are no wrong answers.

The [proposed California mathematics curriculum] framework recommends eight times that teachers use a troubling document, “A Pathway to Equitable Math Instruction: Dismantling Racism in Mathematics Instruction.” This manual claims that teachers addressing students’ mistakes forthrightly is a form of white supremacy. It sets forth indicators of “white supremacy culture in the mathematics classroom,” including a focus on “getting the right answer,” teaching math in a “linear fashion,” requiring students to “show their work” and grading them on demonstrated knowledge of the subject matter. “The concept of mathematics being purely objective is unequivocally false,” the manual explains. “Upholding the idea that there are always right and wrong answers perpetuates ‘objectivity’.” Apparently, that’s also racist.

and the ruling class continue their program of destroying, not just education, let alone mathematics education, but their own civilization. The target is also not just the hated America, but reason and knowledge themselves, the heritage of all civilizations.

(1) For if you let fall from the same height two weights of which one is many times as heavy as the other, you will see that the ratio of the times required for the motion does not depend on the ratio of the weights, but that the difference in time is a very small one. 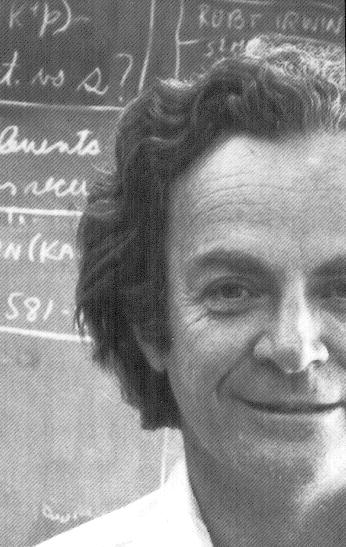 This is the third of four lectures on a rather difficult subject -- the theory of quantum electrodynamics -- and since there are obviously more people here tonight than there were before, some of you haven't heard the other two lectures and will find this lecture incomprehensible. Those of you who have heard the other two lectures will also find this lecture incomprehensible, but you know that that's all right:  as I explained in the first lecture, the way we have to describe Nature is generally incomprehensible to us.

These ultimate springs and principles are totally shut up from human curiosity and enquiry. Elasticity, gravity, cohesion of parts, communication of motion by impulse [sic]; these are probably the ultimate causes and principles which we shall ever discover in nature.

Subtle is the Lord God,
but malicious is he not.

Albert Einstein, on visit to Princeton University, April 1921, inscribed over the fireplace, Jones Hall 202 -- previously Fine Hall, when Einstein had an office (Room 109) there in 1933, before Fuld Hall of the Institute for Advanced Study was finished in 1939, and before the New Fine Hall of the University was built.

What to call Philosophy of Science in Greek involves some problems. I have used Φυσικὴ Φιλοσοφία, but in origin this did not really mean Philosophy of Science:  It was just what the earliest Greek philosophy was called in general, because the philosophers talked about nature, φύσις. What we see in Latin, Philosophia Naturalis, comes to mean what is now called "Physics" (which would have been Φυσικά, "Natural [Things]," in Greek).

At the same time, what "Philosophy of Science" would be in Greek or Latin itself involves a problem. In Latin we would get Philosophia Scientiae, or in Greek ἡ τῆς Ἐπιστήμης Φιλοσοφία. Both of these would simply mean "Philosophy of Knowledge," which sounds like what we already call "Epistemology." The meaning of "science" in English has narrowed from the "knowledge" meaning of scientia to the modern meaning of the natural or social, "hard" or "soft," sciences. This happened by the 1840's. In fact, I have just seen the claim that the modern meaning of "scientist" was coined by William Whewell, at Trinity College, Cambridge [Christoph Irmscher, "Inventing the Scientist," The Wall Street Journal, June 29-30, 2019, C7]. Wissenschaft in German retains a somewhat broader meaning and still gets used for things in philosophy that, in English, would not usually be regarded as sciences.

In Modern Greek, Επιστήμη (losing the breathing) has narrowed down to the English meaning of "science." For "knowledge," Modern Greek has γνώση (which would have been γνῶσις in Classical Greek). But if we used Επιστήμη for its Modern sense, then our term "Epistemology" would, by the same token, mean the "study of science" rather than of knowledge. We could use "Epistemology" itself for "Philosophy of Science." So I am not sure that the Modern meaning is going to be much help.

A possibility could be "Philosophy of Natural Philosophy"; but this is redundant (like the "Department of Redundancy Department"), so I have picked up Φυσικὴ Φιλοσοφία off of the cutting room floor and given it new life here. It may not much matter. English usage is not going to start using an expression in Greek, and Modern Greek can use its own words.