When I started in the Philosophy Department at the University of Texas in 1975, I was part, of course, of a cohort of students who started about the same time. They make movies about this sort of thing -- the young and hopeful face the future together. By then, I had already been a graduate student for three years at the University of Hawai'i and was developing my own views after my studies there, including much of my reading of Leonard Nelson and Rudolf Otto. For a lot of the students, this was their intitial experience in graduate school, and I might have been a little older than they were; but there also some others who were actually older than me and were going back to school after some other life experiences.

In the latter category was Frank Lambert. I got to know Frank because we were both in an Alfred North Whitehead seminar given by Douglas Browning in the Spring of 1976. This was an evening class, and when it was over Browning would always say, "Ya'll come down to Scholz's," meaning Scholz's Beer Garden (Scholz Garten) just south of the University. As the State of Texas took over the land lying between the State Capitol and the University, to build the office buildings representing, even in Texas, the growth of government, Scholz's quickly became about the only private business in the area. Since it was popular with legislators and lobbyists, and was a historic landmark, it was probably in little danger of being kicked out by the State; and it was still going strong the last time I was in Austin, in 2010.

I had already gotten the impression about a lot of philosophy students that they were beguiled by their own wit and enjoyed philosophy for the sophistries they could inflict on each other, and on the naive or unsuspecting. Plato already explored this phenomenon in some of his dialogues, like the Euthydemus. With other philosophy students, I just couldn't always tell why they were in philosophy. Since it was the way of analytic philosophy to devalue or dismiss questions about being and value in philosophy, to the point where, as Alan Bloom said, the exponents of such philosophy, "simply would not and could not talk about anything important," this was an approach ready-made for anyone with more interest in debate and clever argument than with the truth on any substantive matter. The department at Texas had less analytic emphasis than most, and so it attracted more of a spectrum of interests, but there was also the contingent of debaters, whose lack of seriousness also seemed at least in part a function of youth.

Frank Lambert was definitely not in that group. He had been a career minister of religion in the Presbyterian Church. A crisis of faith led him to put that aside and come back to school in philosophy. Like me, he started graduate school in 1972, obtaining a Master of Philosophy from the University of Delaware; and then, like me, he started at the University of Texas in 1975. By then I was prepared to take religion and faith more seriously and sympathetically than I might have a few years earlier, and Frank and I got into our conversations about it over beer at Scholz's. It has been so long ago now, I really couldn't say specifically what we talked about, but I was already prepared with some body of theory about religion, and I imagine I must have been ready to share that to some extent (or never shut up about it). Since philosophy of religion, then and now, has been hampered by reductionist, nihilistic, or idioscyncratic philosophical views, innocent of attention to actual religions or biased with the assumption that Christianity or Judaism are paradigmatic, I hope that my conversation might have had a broader appeal to Frank than what we otherwise were getting in the Department.

After that semester, we remained friendly but did not have close or regular contact. As the years went by and as I finished my class work and withdrew into writing, I gradually fell out of touch with Frank altogether. By 1982 I was writing my dissertation full time back in Los Angeles. But I heard that Frank had actually gone back to Presbyterian ministering (1977-1981). I finished my degree and for a couple of years was on the beach, hopelessly looking for a teaching job. At some point in there, probably on my 1986 trip, I was back in Austin visiting the Philosophy Department. The staff (who generally Know All, unlike the faculty) gave me the bad news. Frank had come down with cancer, one of these deadly organ cancers, about which I have never heard good accounts -- it might have been pancreatic cancer. For a while it went into remission, and Frank not only finished his philosophy dissertation, a year before me in 1984, but he had also earned another degree, a Master's in Educational Psychology in 1983.

Recently married, his life seemed seemed to be prospering, and he was still registered at UT even after graduating, with an intention of completing a Ph.D. in Counseling Psychology; but then he was suddenly overtaken by the disease and died in September 1985. I felt bad about this, for him, for all the obvious reasons; but I also felt bad that I had allowed myself to fall out of contact for so long. Of course, now I feel that I have fallen out of contact with quite a few people, but I must reflect that such things are not a one-way street. Someone has to fall out of contact with me, as well as me with them, for contact actually to be lost -- and I could always be reached through the same address in Los Angeles from 1955 to 2013. I have old friends from whom I never hear and would be entirely out of touch with if I didn't take the intiative. 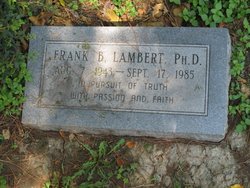 With some of them, I figure that it is just their manner. With others, I sometimes regetfully conclude that either they actually don't like me very much or are sufficiently uninterested to maintain communication. In such cases, it seems appropriate to let go.

When you get out of touch, however, because of the press of the events of life and the carelessness of youth, at least you can reflect that you can renew ties later. I think Kurt Vonnegut, getting older, tells the story about attempts to track down old friends with late night phone calls. Alcohol may have been involved. Frank Lambert is someone I would have liked to talk to at just this point in life, to see how it all went for him. As it is, all I have now is the inscription on his gravemarker in Austin:  "In Pursuit of Truth, with Passion and Faith." Actually, this is rather nicely put; and it expresses just the sort of seriousness, in philosophy and religion, that attracted me to Frank in the first place. More the shame that we can't talk about it.

I would have especially liked to discuss his dissertation, Two Views of the Self and the Conceptual Foundations of Psychotherapy [1984], which has a great deal in it about Martin Heidegger, whom I regard as a vile person with doctrines of evil import. Frank was writing before it really all hit the fan about Heidegger in the '80's; but I already had a critical perspective on Heidegger from Peter Gay's Weimar Culture, the Outsider as Insider [Harper Torchbook, 1970], which I had read in Hawai'i, and from the rather transparent apologetic that I was getting in classes there. I might have liked to have politely challenged Frank's use of him. Obviously, Heidegger had not come up in our original conversations.

Over time, I have fitfully tried to make contact with other members of my graduate school cohort. With the ones who went on to academic careers, it is now relatively easy to track them down. Others, as far as I can tell, have vanished -- at least as far as searches on the Internet go. Since I never felt the kind of affinity with other graduate students, at least at Texas, that I did with Frank Lambert, it doesn't surprise me much that nothing like a friendship or even a dialogue develops with them. Some, however, at least answer e-mails. Others ignore me, even when I've tried them again after a few years -- people with whom I thought I was at least friendly in Austin, if not actual friends. In truth, these may be cases again of it simply being their manner. Or, I suspect, the low level of existence (a Community College) and (conventional) accomplishment in my academic career may mean that I have nothing of interest to offer them, which puts their attitude in same category of insularity and self-reference (or autism) that I have otherwise encountered in academic philosophy. Indeed, I sometimes have the impression that the likelihood of a response from someone may be in inverse proportion to their level of achievement, i.e. the exalted level of their institution, the volume of their publications, or their functional status in the American Philosophical Association. I am not someone for them to take seriously.

That is where Frank was certainly different, and continued to be. He does not seem to have been looking for an academic career in philosophy at all. The degree in educational psychology indicated a new professional direction, and it may also have served the needs, as he saw them, of his career in religion. It would be nice to know. In any case, part of my unease about Frank was my realization a few years ago that I was unable to remember his name. Then yesterday, as has happened more than once, out of nowhere I suddenly remembered it. And I decided this meant it was time to do something about his memory. I am sorry that, in later years, I did not know him better; but then, as I said, this sort of thing is not a one-way street.