"Be My Neighbor" Yard Signs

Hypocrisy is an homage that vice pays to virtue.

Recently, people in the area where I live, in central New Jersey, have begun putting signs in their yard that say something of the same sort. In English the signs say, "No matter where you are from, we're glad you're our neighbor." This is a kind, liberal, and laudable sentiment.

Since it has no more of an edge than the statement by Mr. Rogers, one might wonder why this expression is suddenly so popular. 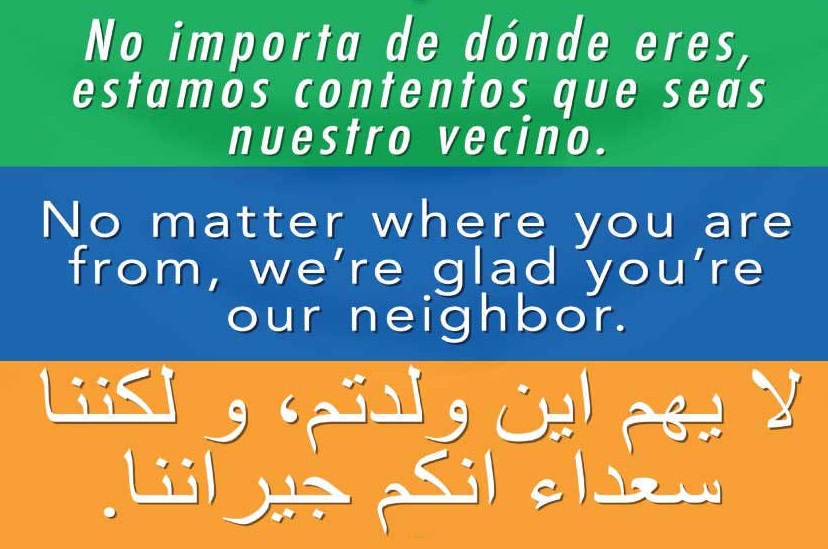 Our clue is going to be what else is on the sign. The English statement is translated into Spanish and Arabic. Some knowledge of public controversies is necessary to understand the point of this.

These signs are a way, not just of disagreeing with the President, Donald Trump, but of accusing him of things. The actual political issues are about illegal aliens and Muslim immigration. That is why the signs are in Spanish, for the illegals, and Arabic, for the Muslims, as well as in English. Of course, Muslim immigrants are often from Somalia, Iran, and Pakistan, where Arabic is not the language used. In Europe, however, there have been conspicuous problems with refugees from Syria, where Arabic is indeed spoken.

What evoked this response in relation to illegal aliens was Trump's campaign promise to deport them, or at least to deport aliens who have commited crimes or otherwise found themselves in the custody of law enforcement. The public debate about this matter is a tissue of dishonesty. Thus, Democrats and leftists never acknowledge that the complaint is about people who are in the country illegally, especially those who commit crimes while they are in the country illegally. Instead, the "liberal" rhetoric is always that the complaint is simply about "immigrants," with pious declarations about all of us being immigrants, etc., often with the added jolt that the complaint about "immigrants" is only made because of the race of the "immigrants." Therefore, Mr. Trump is a bigot and racist. However, when the Democrats controlled Congress, from 2009 to 2011, and they made no changes in immigration law, we did not hear these charges about them. The laws that Mr. Trump wishes to enforce, according to his Constitutional duty to see that "the laws are faithfully executed," and that many Americans wish to see enforced, are those left in place by the Democrats -- laws that Democrats, apparently, have no intention of enforcing or seeing enforced.

So the implication of the yard signs is that Mr. Trump wants to deport criminal illegal aliens just because he doesn't like where they are from.

It is characteristic of "liberal" self-righteouness and moral preening, to deliberately misconstrue and misrepresent the views of opponents. With the "be my neighbor" yard signs, this happens to be a very easy and convenient self-righteousness. Illegal aliens tend to be poor, if not destitute. They are not going to be living in any of the neighborhoods were I see these signs -- although they might get hired to work there, usually temporarily. The only Spanish speaking people with any connection to illegal aliens who might buy into such neighborhoods would be the human traffickers and drug dealers who bring the aliens, and drugs, across the Southern border of the United States. Since the human traffickers, the coyotes, often rob, rape, and murder their clients, or leave them to die in the desert, or in abandoned vehicles, the people who place these yard signs might actually find such neighbors disturbing. But that is not their self-congratulatory narrative.

Since the whole business is a matter of blind ideology, one wonders how far it goes with the people using the yard signs. Much of leftist rhetoric is that borders and immigration laws should not exist -- some libertarians also believe as much -- and the common, meaningless slogan, "No human being is illegal," stated as an objection to certain language, is instead an assertion that anyone can enter the United States at any time and in any way they want. This is typical of leftist rhetoric, where a quibble about language is used to conceal, not only the actual position being attacked, but even the position of the advocate.

A nice example of this quibble is in the August 15, 2017 Wall Street Journal, where in a quote (from HarpersBazzar.com) Jennifer Wright says, "You do not need to try to make it work with someone who thinks of people as 'illegals.' Just divorce them" ["Notable & Quotable: Divorce," A15]. So what is Ms. Wright saying? That the shorthand expression of "illegals" for "people who, by their presence in the country, are violating the laws of the United States" renders them outcastes of the moral community? So how would Ms. Wright state it? Or, is it not the case that Ms. Wright regards it as meaningless and irrelevant that illegal aliens are violating the laws of the United States? And what does she think about immigration, that there should be no laws? So her quibble conceals the real beliefs both of herself and of whomever she might want to divorce. They might be well advised to divorce her for sophistry.

But if Ms. Wright, and others, don't want immigration laws at all, much less ones that are enforced, this is disingenuous to dishonest. The countries admired by such people, like Cuba, are prison states who hold their citizens hostage and generally allow no legal emigration. Mexico itself has more severe immigration laws than the United States, and not long ago it was reported that a Mexican policeman had shot and killed a Mexican citizen because he believed the suspect was an illegal alien from Central America. The policeman was not penalized.

After the Russian Revolution, Lenin imagined that the Soviet border would need to be fortified because of all the people trying to get into the growing workers' paradise. Of course, the opposite became the case, and Communist countries soon fortified their borders against people leaving. It is the United States that people are trying to get into, and the border is only imperfectly fortified against those efforts. Part of the problem also are the tunnels that are dug under the border, where cities exist on both sides of the fences and barriers -- although such tunnels tend to get used more for smuggling drugs than people.

The use of Arabic on the yard signs is a reference to immigration and refugee policy for people from Muslim countries. There are two areas of concern there. One is the infiltration of Mulsim terrorists into the United States. Even native born Muslims sometimes betray their radicalized ideology by travelling to terrorist havens for indoctrination and training. Several terrorist attacks in the United States over the last few years have involved immigrants or the children of immigrants who have become radicalized and travelled to such havens.

The people with the yard signs probably don't want terrorists living next door to them -- and terrorists often have or get enough money to do so -- but they prefer to see the problem as no more than bigotry and racism against Muslims, where Muslim terrorists and jihadists are misunderstood because of "Islamophobia," and properly hate us anyway because it is America that is truly evil. Again, one wonders, with many of the thoughtless people who congratulate themselves by using these signs, how far they understand the ideology they are invoking. The Obama Administration never spoke of Islamic terrorism or jihadism, only "violent extremism," which actually seemed to mean, not real terrorists, but Republicans, the National Rifle Association, and the Tea Party groups -- who are not particularly extreme and, if anything, less violent than the general population. But Democrats and the left want their political opponents to be the terrorists, not the people who actually are terrorists.

The other issue about Muslim immigration is cultural. Rates of rape and sexual assault went up dramatically when Sweden and Germany accepted large numbers of Syrian and other refugees. Activists who rage against the "rape culture" at American schools, which are generally far safer than other places in the country, fall curiously silent when it comes to the status of women in Islam and how Muslim men often treat women. One does not hear about a "rape culture" in Islam. That would be "Islamophobic." Instead, when the courageous Ayaan Hirsi Ali, a Somali woman fighting for reform, alerts people about what is in Islamic law and about what goes on in Muslim countries and communities, she is tarred as engaging in "hate speech" by the vicious, biased, and hypocritical "Southern Poverty Law Center." And, of course, when groups of Muslim men attacked women on a recent New Year's Eve in Cologne, Germany, there were few arrests and the police and politicians tried to cover it up that anything bad had actually happened. Thus we see that in the leftist universe, protecting sexual assault, by Muslims, is more important than protecting women.

So again, we might wonder if the people placing these yard signs really want neighbors who, even if they have nothing to do with terrorism or jihadism, may nevertheless abuse their women. Not long ago, a young Muslim woman complained that she was harrassed on the New York City subway by men who identified themselves as supporting Donald Trump and who tried to pull off her head scarf. Unfortunately, there were many witnesses to this supposed harrassment, and no one confirmed that anything of the sort had happened. The truth was that the young woman had stayed out against the wishes of her parents. She was charged with filing a false police report. When she appeared in court, it turned out that her head had been shaved. This was done by her mother to punish her, not for filing a false police report, but for disobeying her parents in her social life. This young woman, as it happens, was an adult. But neither the press nor feminists accused the parents of assault, abuse, or even sexism. But the woman may have been lucky not to be in a family that believed in "honor killing." So we are given to understand that if one is not to engage in "Islamophobia," it is a matter of "see no evil" and "hear no evil" in Islam.

So the "Be My Neighbor" yard signs are meaningless moral grandstanding and hypocrisy. Those who use them congratulate themselves that they are not bigoted racists, they are tolerant and open minded, while those who worry about illegal aliens or Muslim sexists and terrorists are no more than bigoted racists themselves. Such smug and complacent people do not seem to understand that their attitude is self-defeating. With its implicit smear of honest concerns and disagreements, and its blindness to real issues, it is what helped get Donald Trump elected. If they keep it up, it will help get Donald Trump re-elected. He can hardly complain about that.