Julian Day Numbers for dates on the Gregorian and Julian Calendars

The first lieutenant turned to [Captain] Jack [Aubrey], took off his hat and said, 'Twelve o'clock, sir, if you please, and fifty-eight minutes north.'

Jack turned to the officer of the watch and said, 'Mr Nicholls, make it twelve.'

Julian Day Numbers, or the Julian Date (JD), are the absolute count of days that have elapsed since Noon 1 January 4713 BC on the Julian Calendar, or on what may more strictly be called the Julian "Proleptic" Calendar, meaning the Julian Calendar as applied to an era prior to its actual use. That use began with Julius Caesar in 46 BC. That the Julian Day begins at Noon reflects the practice of the Astronomical or Nautical Day before 1925. The Civil Day of the same calendar date begins the Midnight before the Astronomical or Nautical Day. That a new President of the United States is sworn in at Noon, with the authority of the old President active until then, may still reflect a sense that the day begins at that point [note].

The virtue of the Astronomical Day was that the observations of a single night could be unambiguously ascribed to a single calendar day, something that might also have been nice for the night naval battles off Guadalcanal. Otherwise, the astronomer must use a double date, e.g. the night of 14-15 January, to avoid ambiguity -- exactly the practice that is now required. The Nautical Day might take advantage of the astronomical practice, as navigators shoot the stars to fix a ship's location, but the convention had more to do with the ritual of the Noon Sighting, which, at least in the days of sail, was the moment that the ship's clocks whould be reset to Local Apparent Time and a new calendar date recorded in the ship's log. The Noon Sighting called for some considerable skill with the sextant, since the sun appears to "hang" at its maximum elevation for a few moments, and the navigator must exercise his experience and judgment to determine when the Meridian was reached. As commemorated by Patrick O'Brian above, the Sailing Master was the one to perform this determination, which is then communicated through no less than six levels of command before the hour glass is turned [note].

The device of Julian Day Numbers was introduced by the polymath Joseph Justus Scaliger (1540-1609). He named the "Julian Period," not after the Julian Calendar or even directly after Julius Caesar, but in memory of his father, who happened to be named Julius Caesar Scaliger (1484-1558). The relation of father and son sounds like that between James Mill (1773-1836) and John Stuart Mill (1806-1873), who were among the principal exponents of Utilitarianism. Where John Stuart Mill was being taught Greek at three, Scaliger's father required him as a child to give a short speech in Latin every day. The elder Scaliger, however, for some reason forbade the study of Greek, which the son took up on the father's death, determining that "those who do not know Greek know nothing at all." As the younger Mill seems to have been plagued by his father's memory the rest of his life, Scaliger was also troubled, suffering from strange dreams and insomia and sometimes forgetting to eat. He thought that he had once encountered the Devil. But Scaliger was also one of Europe's first Arabists, having studied with Guillaume Postel (1510-1581), himself a very eccentric scholar, ruled insane by the Inquisition, who obtained the first Chair of Arabic at the Collège de France in 1539. Scaliger was invited to teach Arabic at Leiden in 1592. He hated lecturing but was instrumental in establishing a Chair of Arabic at the University in 1599. One of Scaliger's students, Thomas van Erpe, or Erpenius (1584-1625), produced the first modern grammar of Arabic, the Grammatica Arabica (1613).

Julian Day Numbers effectively ended the use of the Egyptian calendar and the Era of Nabonassar for astronomical purposes, as had been introduced by Claudius Ptolemy (c.100-c.170 AD). Scaliger picked 4713 BC because it was the first year on a number of different calendar cycles and was earlier than any possible historical dates that he knew of. "Julian Day Numbers" may refer to integer numbers corresponding to whole days, while the "Julian Date" may mean an integer plus decimal that brings the Julian count down to precise parts of a day.

For the month, a day number must be found on the accompanying table. If we are in the month of September, the corresponding day number is 184.

The table of months is then searched to find a day number smaller than the remainder of the procedure above (258). This proves to be 245, for November.

Dates on the Julian Calendar are obtained simply by ignoring the factor of the Gregorian Correction.

Chronology and Julian Day Numbers for the Egyptian XII Dynasty 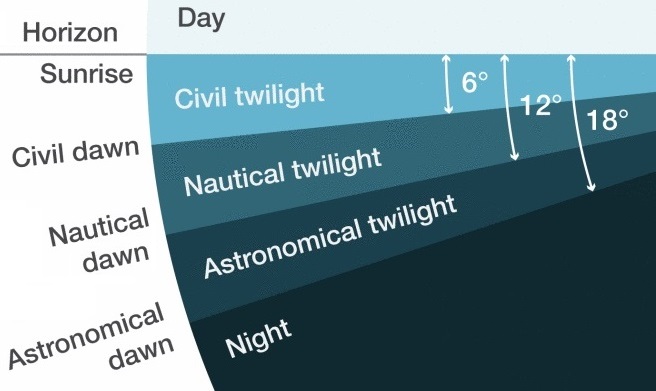 Astronomers need the darkest skies possible. So it is during Astronomical Twilight that they begin to lose that. At the beginning of Nautical Twilight, the sky is too light for nightime astronomy. During Nautical Twilight, however, when the horizon becomes visible, there are still enough bright stars that their angle above the horizon can be observed and measured, and the position of the observer calculated. With Civil Twilight, the sky will be too bright either for astronomy or navigation -- except that very bright objects, like Venus or Jupiter, may still be visible. Of course, astronomy of the sun, or navigation by shooting the sun, can begin with the actual sunrise.

This process, of course, is reversed at sunset, where "dusk" replaces "dawn," and astral navigation and then astronomy can begin in reversed sequence. Maps showing areas of day and night on maps of the earth often also show boundaries with shadings for the three areas of twilight. In ordinary life, people need have little concern for any of this; and navigation now is typtically a matter of GSP signals. Casual sailors, and even the typical practice of navies, need not worry about the old forms of celestial navigation. Astronomers, however, still want dark skies.

One and only one person can give steering and engine orders at any one time....The commanding officer may take over the deck or the conn...In taking the conn from the officer of the deck, the captain should do so in such a manner that all personnel of the bridge watch will be notified of the fact.

Watch Officer's Guide, A Handbook for all Deck Watch Officers, Revised by K.C. Jacobsen, Commander, U.S. Navy, 11th Edition [Naval Institute Press, Annapolis, Maryland, 1981, pp. 68-69, color added]; the "conn" is to "conduct" the ship by way of the steering and engine orders; the "deck" involves all other commands on the Watch, e.g. "Open fire."

The Sailing Master was a Warrant Officer, not a Commissioned Officer, often an older man. He was legally responsible for the nagivation of the ship, not the Captain, who might be young and relatively inexperienced (Horatio Nelson was a Captain at 21). The men called "Master's Mates" were those in training under the Sailing Master. Since the captain of a merchant ship was often called "Master" rather than "Captain," we can see that the Naval practice might occasion moments of confusion among those unfamiliar with the conventions. Unlike Naval Sailing Masters, civilian Masters were often woefully unfamiliar with the full demands of navigation, and there is no telling how many ships were lost because of that.

This full elaborate ritual of passing down commands can still be found on modern warships, particularly when the Captain is on the bridge but has assumed control of neither the Deck nor the Conn (as referenced in the epigraph), i.e. he only gives orders to the Officer of the Watch. In the example from Patrick O'Brian, it is noteworthy that the First Lieutenant, who has formally received the report of the Sailing Master and communicated it to the Captain, is not the Officer of the Watch. The Captain then issues his order to the latter.

The full ritual associated with the chain of command is rarely to never seen in movies, where it would waste time and possibily begin to look ridiculous, especially to people familiar with the representation of more casual goings on, as in Star Trek. It's purpose, of course, is to prevent confusion. Everyone can hear the order being passed down, and any misreport can be immediately corrected.

What perhaps might also be mentioned is that the "First Lieutenant" on Jack Aubrey's warships is the "First Officer" because he is the Senior Lieutenant. Modern warships have introduced the "Executive Officer" (the "XO," as opposed to the "CO," the Commanding Officer), who is generally of Command Rank (Lieutenant Commander or Commander), close to the Captain. As with many things, Star Trek does not seem to know what an Executive Officer is for; but the XO is there to handle administrative details, leaving military issues to the Captain. Thus, where Lieutenants are Watch Officers, the Executive Officer is not. But if there is a shortage of toilet paper, that is reported to the XO.

American usage, where the comma separates thousands and the period is used to indicate decimals, is observed.